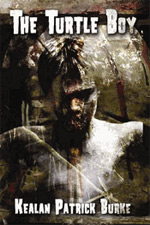 The Turtle Boy takes place in Delaware, Ohio, a small town with plenty of woods and undeveloped land – a young boy’s paradise. The boy in question is Timmy Quinn, who likes nothing better than to play outdoors with his best friend Pete. One summer’s day at Myers Pond, they encounter a strange boy called Darryl – a boy with dirty, torn clothes and hair that was shorn away in patches, and a smile like a row of ripped stitches. Odd in appearance and even odder in behaviour, Darryl enjoys feeding his own ankle to the turtles in the pond. Soon after this meeting, Pete’s father starts acting out of character, grounding Pete and telling Timmy to stay away from his son – for good. It’s clear Pete’s father has something to hide. There are terrible secrets in Delaware, Ohio, and the boy Darryl is determined to reveal them.

Kealan Burke, like myself, is a “new kid on the block” in the writing scene. Aside from numerous short story publications (many collected in a volume entitled Ravenous Ghosts), this is his first novel (to be technically correct, as it is a 100-pager, I should use the term novella). I always approach a newbie with some caution, because you’re never quite sure what you’ll get. But I am delighted to report that this man is clearly going places.

The first thing I noticed was Burke’s use of language. Here’s a prime example:

Though young, he could still remember his father carrying him on his shoulders through endless fields of gold, now replaced by the skeletons of houses awaiting skin.

When an author goes to the trouble of dressing up his prose with imaginative metaphors like that, you know you’re reading someone who cares deeply about the art of writing itself.

The next thing that struck me was his ability to portray child characters. Too often writers stumble at this, writing young characters with overly wise attitudes, but when I read about Timmy Quinn’s life I thought, “That’s it exactly!” The joy in outdoor pursuits, projecting your imagination onto your surroundings; the volatile nature of childhood friendship; the need for love from parents. It’s all there and it all rings true.

As for the story itself, it’s not particularly original, but it is still something of a page-turner, filled with mystery. I had hoped for a little more explanation than I got at the end, but any dissatisfaction is made for in the knowledge that this is the first tale in a series about Timmy Quinn. In fact, this is one of the rare occasions that I’ve wanted to re-read a novel only weeks after finishing it. The Turtle Boy is also, in my opinion, the right kind of horror story. In the horror genre, too much literature concerns itself with grossing out the reader or breaking taboos, losing sight of the proper goal: storytelling. No such mistakes here.

I don’t often comment on a book’s presenation, but in this case I’ll make an exception, in light of the effort that has been put into it. The Turtle Boy is an expensive book to buy, but is the most beautiful book on my shelf. Necessary Evil Press really did a good job. To cap it all, it’s a numbered edition of 450 copies, all signed by the author. I have no qualms about paying big money for this book, becuase these will be like gold dust in about ten years, by which time I would expect an awful lot more people to know the name Kealan Patrick Burke. Like I said, this man is going places.

In summary: perfect bed-time reading. During the week or so that it took to read The Turtle Boy, I really looked forward to curling up in bed for a short read before sleep – an experience that is too rare.