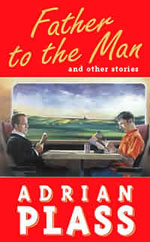 Somehow it feels as if there should be a drum-roll or something to precede this review, as it happens to be the first ever piece of Christian literature I’ve included. Quite odd to have it sandwiched between a load of horror novels, perhaps, but this reviews section was started with a view to reporting on everything I read, so why break the habit?

Father to the Man is a collection of seven stories, most of which feature an aspect of the parent-child relationship in one way or another, whether the child be of primary school age or grown up and coping with a parent’s death.

The first story, “Nothing but the Truth” begins with the enigmatic line Dying was a doddle. And so we have the story of a dead man walking around in spirit form, waiting to see what happens next. Rather than treating us to some elaborate effects-driven What Dreams May Come-type experience, Plass takes the reader to a very ordinary interview situation, where the protagonist is asked to talk about some key moments from his past. As I write this, I realise how boring the concept sounds; but let me tell you it was rivetting. The protagonist reveals his innermost feelings about the death of his father; expressing his heightened fear that death is the end of existence, despite all he believes about God. There is a raw honesty running through this story, and the others, that is a rare find in literature.

“Stanley Morgan’s Minor Misdemeanour”, the third tale in the volume, is another favourite. It concerns a Christian man who, although married with kids, has never quite come to terms with his own sexuality. A brief encounter with a pornographic magazine when he was sixteen has haunted him ever since. The “quiet compatibility” he has with his wife has never seemed to satisfy the hunger for some kind paradise glimpsed elsewhere. Without wanting to spoil the rest of the story, I’ll just say that it’s essentially about seeing through illusions. And if you read between the lines, you might think differently about the use of sex in the media today; through TV adverts and pop videos, etc., we’re all being encouraged to take fantasy a little too seriously, and I reckon it’s anything but healthy for the human mind.

Unfortunately I found many of the endings to these stories a little confusing or disappointing. Sometimes it’s as if Plass is dancing around the edge of something really meaningful, and just when I think I’m about to be enlightened, I end up scratching my head instead. So, whilst that does somewhat spoil things, this book still scores well above average for its brutal honesty and in-depth look at human life and relationships. And it’s pretty funny to boot.