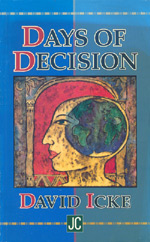 This is the fourth book David Icke wrote since his spiritual awakening in 1990. It’s also his smallest, clocking up only 86 pages. Nevertheless, what it lacks in size, it makes up for in content. Chapters 1 to 4 in particular will arrest the attention of newcomers to Icke’s work and dispel any notion of “crackpot” that might have festered in the wake of that long distant Wogan interview.

We begin with fast, sharp insight into all the planet-raping, soul-destroying insanity that we call normal life in the western world. Icke then shines a light on humanity’s lack of thinking, exposing the conditioning of everyday life and our unthinking acquiescence it. Then comes a courageous expose on religion and its use as a tool for control. Science then comes under fire, or rather, system-serving science, which is quietly destroying the planet. You won’t be unaffected by the information in these chapters. It’s as relevant today as ever.

The book then turns to matters of an esoteric nature, discussing psychic channelling; the universe as a frequency; consciousness and the eternal mind; positive-negative balance (a different way of looking at good and evil); Earth as a conscious entity; an approaching spiritual awakening of humanity; and finally the importance of love.

Icke is not totally on the same page today as what he was expounding in the early 1990s, but there is much in here that reflects the same understanding he now expresses at a deeper level.

Days of Decision is compiled from speeches that Icke made all over the United Kingdom, during or not long after the days of his widespread public ridicule. It would have been amazing to attend one of those early speaking engagements. I’ll bet a lot of mouths regretted their laughter before too many minutes had passed.

Copies of Days of Decision show up now and then on eBay. Well worth chasing it up. If you are someone who has never read any of Icke’s work before and are completely new to his controversial views, this volume is an excellent entry point. From the back cover: “This book is written for those who are beginning their journey to truth and understanding at this time of immense change.” You might well be changed after reading it.