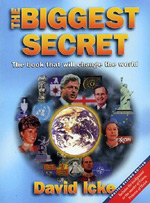 I think this is the tenth David Icke book I have read. It is, I believe, his most popular and biggest selling volume. You may wonder why I didn’t make this one a priority. Well, it’s because this is the book where Icke introduces the lizards for the first time, and I just wasn’t ready to tackle that. I couldn’t fathom that I could end up believing that our world leaders are actually shape-shifting reptilian entities from another dimension. I also didn’t want to have my opinion of Icke dashed to pieces, since I have benefitted so much from other parts of his research. But … I reckoned it was time to bite the bullet and dive in.

Firstly, the title of the book led me to believe that the entire five-hundred-page volume was going to revolve around the theme of reptilian entites. It doesn’t. The reptilian theme is something that Icke weaves throughout the pages, but a lot of the material in the book is concerned with hidden agendas in human society. In essence, the theory that the world is ruled by reptilian entities is based largely upon the view that the gods of antiquity were actual beings of an extra-terrestrial or inter-dimensional nature. Mankind was ruled by these so-called “gods,” and many cultures do speak of reptilian gods. In Icke’s view, the gods never left. Overt rule was exchanged for covert rule. Today, the British Empire is nothing more than the ancient Babylonian Empire relocated and repackaged. Rather than dismiss this whole thing with a knee-jerk reaction, there are certain elements of this research that I personally find fascinating. One is the importance that ruling monarchy place on bloodline, and especially how the bloodline of many key figures in politics, both here and in the USA, can be traced back to Charlemagne (assuming the research is accurate). I find it interesting, and a little suspicious, that we have Egyptian obelisks placed outside powerful buildings around the world. We even have a pyramid with an “all-seeing eye” on the dollar bill, and the same on the reverse of the Great Seal of the United States. This is very much tied into the secret society known as Freemasonry. A look at the key figures involved in the formation of the United States reveals a massive prevalence of Freemasons. Furthermore, Freemasonry has definite links with the occult.

Icke, by his own admission, has never seen an actual reptilian. Evidence for their existence relies on the testimony of witnesses that Icke has been in contact with, including Arizona Wilder (allegedly a “mother goddess” involved in occult ritual), Christine Fitzgerald (allegedly a close confidante of Princess Diana), and Cathy O’Brien (allegedly a Project Monarch MKULTRA mind control slave). Much is said about the British Royal Family in regard to reptilians and occult ritual. Icke places massive amounts of confidence in the testimonies of the people he quotes, and it’s hard to see why he should expect the reader to be carried along with it all. This reminds me of his early books, which are full of “channelled” messages from so-called psychics that Icke placed his trust in. I have to wonder if he’s making essentially the same mistake here again, merely in another context.

The closing chapter of the book, and one of the most fascinating, is about Princess Diana’s death. Icke goes into a lot of detail in an attempt to show that it was an assassination, and not only that but a pre-planned occult ritual sacrifice.

Much of the research in the book was sloppy, disordered and inconclusive, and in the end, I felt frustrated that I couldn’t hold something resembling proof in my hand and say, “Here it is!” So, do reptilian shapeshifters rule the world? Only in the imaginations of those who read uncritically.