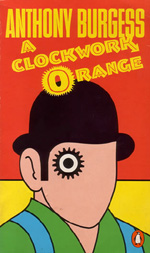 Instruction manuals on how to write fiction tend to feature suggestions like: “Create empathy between the protagonist and your reader.” Thank goodness not every author follows such rules, because then we would never have gems like A Clockwork Orange. The main character, Alex, from whose perspective the tale is told, is no hero. He’s not even an anti-hero; he’s a blatant hooligan of the worst kind. There is almost nothing likeable about him, save for his appreciation of classical music. Alex likes nothing better than going out with his three friends, Pete, Georgie and Dim, for an evening typically consisting of beating up some old person, stealing a car, breaking into someone’s house then raping the woman who lives there. One day he even lures a pair of ten-year-old girls to his house so that he can molest them.

But this is not pornographic fiction. It’s a tale of considerable depth about morality. Why do we do what we do? Alex asks the unaskable question:

But, brothers, this biting of their toe-nails over what is the cause of badness is what turns me into a fine laughing malchick. They don’t go into the cause of goodness, so why the other shop? If lewdies are good that’s because they like it … But what I do I do because I like to do.

Notice the unfamiliar words in the above quote. The entire novel is written in this futuristic juvenile slang. It makes the first couple of pages hard reading, but you quickly get into the swing of assuming the natural meanings of the many strange words on display. Bezoomny = mad; creech = scream; droog = friend. There’s a dictionary at the back of the book, but you won’t need to refer to it.

The really interesting part of the book happens after Alex gets caught by the police and tossed in prison for several years. He gets selected for the Ludovico Technique, a new program designed to turn criminals into good people with astonishing rapidity and reintegrate them into society. For Alex, this means drastically early release from prison, but at what cost?

This begs the question: if one is forced to be good, is this really good? I was reminded of the Christian worldview I used to hold, where I looked forward to a future in heaven where I would not only be free from sin, but I would be unable to sin. But if a person does not have the ability to choose between good and evil, how can good be called good? It is simply action, having no ethical value whatsoever. Is there any virtue in anything, if there is no risk of choosing the opposite path? A person becomes a clockwork orange, his choices imposed upon him. The book is divided into three parts, each one beginning with the telling words “What’s it going to be then, eh?” emphasising the importance of having a will of your own.

Stanley Kubrick’s film adaptation of this novel is, for the most part, very faithful to the book, even to the point of his script mirroring some of the dialogue word-for-word. Both are worth tackling, especially for the philosophically minded. How many religionists have dared to ask: “Why should there be good only?” No, it is assumed that good is right and natural, whereas evil is wrong and unnatural. But the one has no substance without the existence and threat of the other. What’s it going to be then, eh?

3 thoughts on “A Clockwork Orange by Anthony Burgess”