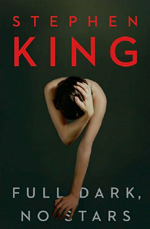 Here we have another volume from King in the tradition of Different Seasons and Four Past Midnight – a collection of four short novels under one roof.

We open with 1922, a tale about a man who plans to murder his wife over an inheritance dispute. In order to make it work, he has to involve his teenage son in the matter. This slant gives a rather common theme a unique flavour.

Big Driver is reminiscent of the movie I Spit on Your Grave. It’s a revenge story about a woman who is raped and left for dead. Highly derivative, but superior to the film in terms of the realism of the protagonist’s actions. And it has its original moments. My personal favourite of the pack.

Fair Extension is the only tale in the volume that has a supernatural element. It’s the old “pact with the devil” scenario. A dying man gets to extend his life, only the price he has to pay is something other than his soul.

These are all stories of domestic life gone awry, where circumstance has forced good people into impossible situations, where the choices they are forced to make are difficult, and in some cases unconscionable. This is the dark side of the white picket fence. King is on form.