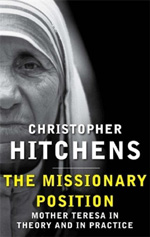 Notorious atheist Christopher Hitchens has written this short volume, subtitled “Mother Teresa in Theory and Practice” as a critique of the enigmatic Catholic nun that everyone knows so well – or do they? My opinion of Mother Teresa, prior to reading this book, was stereotypically positive, informed only by the TV news. I don’t like Christianity, but regardless of one’s religion (or lack thereof), it is possible to live a life of selfless devotion to others. Few of us choose that path, but if anyone shines brightly in this regard, it’s got to be Mother Teresa, right?

Wrong. Hitchens shows how Mother Teresa’s fame began with a documentary made about her Calcutta orphanage – the director insisting that he had captured the first ever miracle on camera. This miracle was the strange quality of the light within the building, which the director believed could not be explained naturally. The media ran with this, giving birth to a legend. The cameraman, who attributed the “miracle” to the quality of the new Kodak film, had no impact.

Hitchens, with painstaking research, unearths records of people who have visited Mother Teresa’s “House for the Dying.” We find a woman who, instead of attempting to improve the lives of “the poorest of the poor”, is interested first and foremost in the advancement of a religious view that makes a virtue out of suffering. While millions of dollars in donations lie dormant in accounts, she insists on maintaining strictly ascetic living conditions, not only for the nuns of her order, but for all her patients. Dying men are not allowed a simple comfort like watching TV or receiving visitors. People languish in pain without freely available painkillers. There was a particularly horrific case of a fifteen-year-old whose life could have been saved if he had been taken to hospital to receive proper medical care, but this was not permitted. “They would all want it,” was the excuse.

Meanwhile Mother Teresa is immune to criticism from a media that fails to inquire deeply enough. Her actions are judged by her reputation, rather than her reputation being judged by her actions. Instead of being a compassionate person, she is motivated first and foremost by the advancement of her religious order.

It’s hard to argue against Hitchens’ dark depiction. From now on, when I think of the word “humanitarian,” it won’t be Mother Teresa’s face that comes to mind. 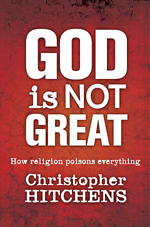 Christopher Hitchens, recently deceased, was one of the most well known defenders of atheism, and probably needs no introduction. He was a lively and passionate speaker, able to put religion in its place with sharp wit and a startling economy of words. Never one to back down from a fight, he displayed a fierce disregard for any heckling from debaters or audiences. He never attacked religion from an overly intellectual philosophical point of view, but made his case against it on the grounds of a thorough knowledge of the horror that religion has been responsible for throughout mankind’s history. All of this made him, in my estimation, the most popular and entertaining atheist to listen to. Hard to compare him to Dawkins, since they each have a different area of expertise.

God Is Not Great is extremely useful as a catalogue of religious atrocity. Atheists will undoubtedly nod their approval of Hitchens’ presentation throughout the book. Only the most utterly brainwashed Christian or Muslim could failed to be embarrassed at the crimes done in the name of their respective religions. But the astute believer will respond, “You can’t judge a religion itself by the behaviour of its followers.” Is there merit to this objection? To an extent, yes. Hitchens appears to be making an ad hominem argument. I think Hitchens would argue that the sheer extent of the bad behaviour testifies to the destructive nature of the idea itself. These are not mere isolated occurances of evil, but appear to be stimulated by the ideas themselves. As the subtitle of the book says: “How religion poisons everything.”

This is true, but but the key question, which Hitchens does not really tackle is this: is the poison really within religion itself, or is it within people? Hitchens’s stance reminds me of the way that people have tried to condemn violent films and videogames as stimulating violent behaviour, when the truth is that the aggressive tendencies already exist within us, which is why we enjoy those kinds of entertainments. Same with pornography. Porn is bad, it is argued, becuase it stimulates sexual thoughts. No. Sexual thoughts exists, as comedian Bill Hicks put it, because of “having a dick.” Hence we have porn. Likewise, Hitchens argues, religion is bad because it turns people bad. On the contrary, the badness and the stupidity are a part of the human makeup. Religion is merely the tool that is used to express that badness and stupidity. The real accusation must be levelled at the selfish ambitions of those who reign at the top of all religious power structures. And the blame also lies at the stupidity of the common man for failing to see when he is being conned. I would put it like this: “People are stupid, therefore religion succeeds,” rather than “Religion poisons everything.”

Hitchens insists on dropping the capital “G” from the word God throughout the book, which is disappointing to me. I’m no fan of religion, but there is philosophical merit to the idea of God, whether understood deistically or pantheistically. There is nothing poisonous about metaphysics. My personal favourite term for the creative agent of the universe is the Infinite, and I always spell it with a capital “I”, purely in reference to its metaphysical nature. And I do not think of the Infinite as a transcendental entity, like the monotheistic religions.

The most disappointing aspect of the book was the slightly hypocritical note on which it closes. After earlier praising pluralism and free speech, Hitchens finishes by saying that we need a new Enlightenment and religion must be excluded from all discussion. How tyrannical of him to decide that for us all. Organised religion might one day die of its own accord, but I doubt that will bring an end to organised stupidity and intolerance. Those unfortunate human traits will simply find a new means of expression.

Hitchens’ critique of religion is, for the most part, valid. It just doesn’t quite reach the heart of the matter. God Is Not Great is a very useful book. An important catalogue of the misuse of religion throughout history.