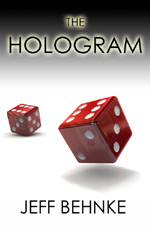 This book is quite unlike anything I have ever read. For a tagline, the author says, “Enjoy this exploration of immaterialistic intuition,” which I think is highly appropriate and was intrumental in attracting me to the book. The term “The Hologram” refers to reality, and the author’s view that reality is much more fluid and changable than we are prone to think. The laws of physics themselves are not set in stone, but exist in the experience of our collective minds. We are literally making reality as we go along by probing it and measuring it.

I am fascinated by the idea that the universe is holographic in nature – that the entire cosmos is an experience of mind, that it doesn’t exist except by conscious perception. It may sound wacky, but even a cursory look at quantum physics reveals that there’s something worth investigating in the notion. This book isn’t quite an examination of the holographic universe theory. It presupposes that you’re aware of it then discusses many related topics. Central to the book is the idea that reality contradicts. We can look at the world from the point of view of materialist science or eastern religion, measuring reality from different archetypes that contradict each other. Truth is found in contradiction.

I confess I can’t really get fully aboard with this material. I don’t think reality contradicts. I think there is an objective truth to discover, even if the universe is just held together by the collective consciousness of all the spirit from all things in the cosmos. It’s too simple to consider the human experience and simply claim that we’re inventing entire galaxies just by observing them. If that were true, then the Earth would have actually been flat when we thought it was. During reading, there were times I was shaking my head, thinking “This can’t be right.” Other times I was scratching my ear in confusion. Still other times my mind was being expanded by fresh angles on ideas. And there were times when I was nodding with delight, thinking “I never saw it quite like that, but yes, that’s it, exactly!”

I finished the book with a much clearer understanding of the essence of what we call good and evil. I gained new insight into the idea that we are all one consciousness interacting with itself in a state of separation. The chief insight for me was in learning never to embrace archetypes – systematised beliefs. Behnke uses a terrific analogy (well, terrific if you’re a computer geek; others might be mystified). Ours minds tend to play “snap to grid” with belief systems. Snap to grid is a function on programs like Microsoft Word where, if you want to draw a square, the program insists that your square conforms to rigid measurements, like 5cm instead of 5.23. Even though you move your mouse pointer to a specific area, the program will “snap” it to the closest grid reference point instead. This is what can easily happen with our beliefs, whether religious or scientific. We may choose to be a sceptic, never fooled by anything, but we are unwittingly embracing the archetype that the material universe is all there is and nothing but the pursuit of evidence will ever lead you into truth. This book was a pleasant confirmation of a eureka experience I had about eight months ago, where I realised that the reason I had been so bewildered my whole life was because I was unconsciously falling into archetypes each time I ping-ponged between athiesm and Christianity. The truth lies uncovering the traps that shape your belief systems and, in doing so, refusing the archetypes.

Despite being confused by some of this book, the things I did understand were powerful, and overall I feel I’ve read something profound. The Hologram is not available in print and can only be downloaded (free) from Paranormal News. If probing the nature of reality is a subject that interests you, I recommend you give it a try.