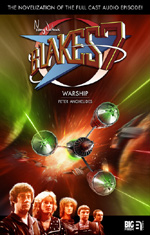 Season 2 of the BBC television series Blake’s 7 culminates in the fulfilment of Blake’s quest to find and destroy the hub of Federation communications, known as Star One, located just off the edge of our galaxy. Whilst this has the intended effect of crippling the Federation’s totalitarian grip on the colonized worlds, it has the unfortunate side-effect of disabling a minefield laid down by the Federation to separate our galaxy from the next – a minefield beyond which an alien invasion fleet has been waiting for entry. (Of course, why the ships can’t simply go around the minefield is never explained, but one learns to accept such silliness when revisiting much loved TV from one’s childhood.) The final episode of the season concludes with Blake’s ship, the Liberator about to embark on a near-suicidal war against the alien invaders. Avon, at the helm, shouts “Fire!” presses a button on the console, and the end credits roll.

Season 3, televised the following year, commences with the tail end of a fierce battle. The Liberator crew is forced to abandon ship using lifepods, while Zen, the ship’s computer, tries to effect repairs. Warship is the untold story of what happens during the inter-season battle. It’s the perfect place to insert a “missing” episode, and indeed the novel reads just like that. The characters are all portrayed authentically, and fans will get a nostalgic thrill from seeing new life breathed into old friends.

The book is published by Big Finish, and is the third in the series. While books 1 and 2 (The Forgotten and Archangel) are lavishly produced hardcovers, sadly Warship is confined to ebook only. The reason for this is possibly because it is significantly shorter than the other volumes. Judging by time time it took to read on my Kindle, I’m guessing it would span not much more than 100 physical book pages. Still, it’s a shame that it couldn’t be included as part of the forthcoming Blake’s 7 anthology. Another reason for not producing a hardcover might be because Warship is actually the novelization of an audiodrama, and as such, may be more of an afterthought to the main product. I haven’t got hold of this yet, but am looking forward to listening to it, as it is acted by the original cast members, with the exception of Peter Tuddenham (Zen), who has passed away. It’s pretty amazing to be able to get almost all the significant cast back thirty years after the original programme.

The story of Warship is rather good. There’s a lot more going on than merely “Liberator engages in space battle until defeated.” Blake and Cally teleport off to a nearby planetoid in the hope of finding aid, only to discover a new threat; meanwhile the crew are having to contend with an alien close encounter – aboard ship. The only part of the story that suffers slightly (and this is inevitable) is its ending, as the plot is forced to join up precisely with the opening of season 3.

Peter Anghelides is a competent writer. There were a few faux pas, as is common with small press fiction, but a forgiveable amount – think of this like the literary equivalient of the shaky sets and dodgy effects of the original series. Of the Blake’s 7 fiction released so far, Warship is definitely a high point, and somewhat restores my faith in the saga, after the slightly disappointing effort that was Archangel.