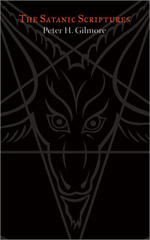 Readers whose only knowledge of Satanism comes from Christian pulpits and media sensationalism could be forgiven for thinking that this book is some dangerous occult grimoire. In fact, I imagine the title and cover design were picked to elicit that very response, much to the amusement of real Satanists. The term “The Satanic Scriptures” is purely an oxymoron, for the idea of scriptural dogma is the antithesis of what Satanism is about. Satanism is a philosophy of individualism, and being an individual necessitates being an adversary to societal (i.e. Christian) norms. Hence, Satanists embrace “Satan” as a symbol of their defiance. It should be noted that Satanists come in all shapes and sizes, from theists who view Satan as a literal God, to atheists who only make use of the Fallen Angel’s symbolic relevance. Peter H. Gilmore, High Priest of the Church of Satan, is firmly rooted in the latter category.

The Church of Satan was formed in 1966 by Anton LaVey, who authored The Satanic Bible (1969) and four other works. Upon his death in 1997, management of the organisation passed to LaVey’s long-time friend Gilmore. During his time as a member of the church, Gilmore contributed essays to the organisation’s magazine The Black Flame. Many of these essays (with some modifications) make up the bulk of The Satanic Scriptures.

There are a wide variety of subjects covered: reflections on life as an individualist; Satanic perspectives on world events such as 9/11 and Columbine; defence of accusations of Satanic Ritual Abuse (dubbed the Satanic Panic); fascism; eugenics; asthetics; music; even light-hearted reflections on old-time monster movies. On of my favourite essays was entitled “Intellectual Black Holes,” concerning individuals who enter into conversation/debate with no other motive but to suck the life out of you (particularly relevant to me in light of my frequent controversial blogging).

Towards the end are a number of essays that are chiefly concerned with what a Satanist should aspire to be, and what sort of person the Church of Satan wishes to attract (as well as those it wishes to repel). These essays might cause some people to view Gilmore as being a bit self-important, but I actually found this to be a refreshingly different from the typical “Come and join us, everyone” attitude of Christianity. Clearly Gilmore is not playing the power-through-numbers game. He has a clear agenda of separating the wheat from the chaff, managing the Church of Satan as an elitist organisation where only a particular kind of person need apply. The Church of Satan is also one of the very few “religions” that understands the need for pluralism in society: Satanism for those who are natually inclined to be individualists, leaders, pioneers, and orthodox religions for those who wish to follow the herd.

The book finishes with a short section entitled “Rituals,” which includes a Satanic wedding ceremony and a Satanic funeral. If you can wrap your head around the idea of saying “Hail Satan!” while knowing you don’t believe in a literal devil, these rituals actually represent refreshing realism. The wedding ceremony conveys genuine meaning while jettisoning everything that is pretentious or melodramatic from a traditional church wedding. Likewise, the funeral is a celebration of a person’s past life, rather than a sanctimonious prattling about a hypothetical heaven.

Where do I stand, since I’ve been speaking so highly of Satanism? Well, I’m not a Satanist. Satanism, for me, represents one avenue of many for gaining insight. I don’t see it as something that I can use to form a total worldview, but I do see it as something that can be studied critically to help me become more self-realised. The Satanic Scriptures is recommended reading for anyone who wishes to learn a little something about “man the animal” from an unusal angle.