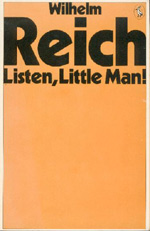 Wilhelm Reich is a name that has fascinated me for some time now. He was a radical individualist, sexual revolutionist, and discoverer of “orgone” – his term for a mysterious hidden life energy. Like all outspoken individualists, he was tarred with the “villain” brush by the common herd of humanity, because he didn’t conform to established norms.

This short volume of only a hunded pages doesn’t go into his theories. Instead, it is a rant against the small-mindedness and pettiness of the herd animal that is the common man. And it’s fabulous. A damning treatise against group-think. It was originally never meant to be published, but I’m very glad it was. Written not long after the Second World War, it makes frequent reference to the Little Man’s own self-destructive insanity, in his need for a fuhrer to rule over him – which Reich blames on the cowardice of refusing to take responsibility for one’s own existence.

The Little Man spoken of throughout the book is a composite character of every perceived pettiness, written from the bitter experience of being at the brunt of it. The book is honest, thorough and passionate, with both anger and fear prominent emotions. If you’re an outspoken individualist, then you might know what it’s like to suffer at the hands of others who consider it their moral duty to bring about your undoing. You will find much to relate to in Wilhelm Reich. For a book that’s so angry, it ends on a surprisingly optimistic note about the human race. There is also some important introspection on rooting out the Little Man within all of us.

Listen, Little Man! actually inspired me to write an essay of my own in the same formula, based on my own personal life experience. I might never publish it, but writing it served me as a personal exorcism of unwanted emotion.