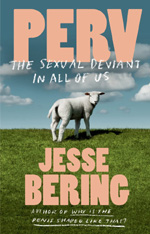 Psychologist Jesse Bering first hit my radar in 2012, when I saw an interview with him conducted at the Festival of Dangerous Ideas 2012 (see below). In this he talks about the case of an unfortunate young teenager who discovered his father’s medical textbook. This book featured nude photographs of women, which the boy used to aid his first attempts at masturbation. However, these women also happened to be amputees. One can understand how the boy may have been able to feel excitement at witnessing the forbidden areas of a woman’s body while also being able to disregard the missing limbs. However, if you know something about the unconscious mind, it tends to forge associations without us being aware of it. This is how the boy ended up with what is termed paraphilia – a sexual attraction towards something outside of the bounds of what is usually considered sexual. And he was seemingly stuck with it for life. Odd as it sounds, amputees turned him on more than full-bodied women.

Jesse Bering has written a book that tackles paraphilia head on. It is written in a conversational style, with plenty of humour, but also succeeds in being informative. If there is one overall message, it is “Lighten up.” Paraphilias are really not that big a deal, for the most part. The one exception to this might be paedophilia, but even here Bering takes the daring stance of refusing to mimic the demonising stance of the mass media. There is no doubt that actual child abuse is horrific and unacceptable. But one side of this story that is not often heard is the testimony of the closet paedophile, who feels attracted to children but who also feels disturbed about this attraction, who doesn’t understand why he is the way he is, and who goes through life harbouring this dark secret and harming no one. If you’re willing to be dispassionate and objective about hot topics, this book will definitely challenge your preconceptions.

Sexuality is a part of human nature that we’ve only recently started coming to terms with. Over the past century or so, there has definitely been a gradual movement away from repression towards a more balanced and scientific understanding of this part of our lives. The first thirty-five years of my life were filled with a great deal of confusion about sex, thanks to unrealistic Christian ideals. In retrospect, I think a healthy outlook on sexuality is measured by how effectively you manage to ignore the prevailing cultural norms. Thankfully, we now have a growing body of literature to help us navigate these dangerous waters, to get us to the place where we can integrate our sexuality into our lives in a sane, healthy way. Jesse Bering’s Perv comes highly recommended in that regard.

The assumption of the book is that there is a sexual deviant in all of us. This is a statement about the malleability and diversity of sexuality, not a condemnation of the entire human race. How about you? Are you ready to face up to the aspects of your own sexuality that have surprised or disturbed you? With the help of this book, you might actually end up laughing about it.

The attitude of the Christian masses towards sexual minorities has tended to be one of condemnation and a lack of empathy. As rational people come to understand sexually better, instead of relying on the outdated dogmas of a two-thousand-year-old religious text from the near east, then I think we’re going to see a gradual shift towards greater compassion and tolerance. The sooner, the better.