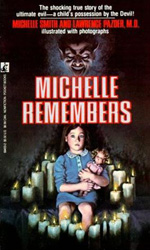 The first book ever to be written on the subject of satanic ritual abuse (SRA) was Michelle Remembers in 1980, co-written by Michelle Smith and her psychiatrist Lawrence Pazder. Over a period of one year, Pazder records hundreds of sessions where Smith allegedly recovers repressed memories of herself as a five-year-old undergoing a prolonged period of ritual abuse at the hands of a satanic cult. She is tortured, sexually abused, locked in a cage, witness to murders, and painted in the blood of sacrifice victims. At one point, a Satanist sews horns and a tail into Smith’s flesh. The scars left by this surgery would have proved invaluable in authenticating the account, but there is no such evidence on Smith’s adult body.

The ceremonies were gory and bizarre, and bore no relation to the rituals of the Church of Satan. Nevertheless, Pazder wastes no time in naming this specific organisation as the perpetrator of Smith’s abuse. He also states, in total ignorance of known facts: “The Church of Satan is a worldwide organization. It’s actually older than the Christian Church.” Pazder was forced to withdraw his assertion of the Church of Satan’s involvement after the book’s publication, when Anton LaVey threatened to sue for libel.

As the story progresses, it becomes clear that Smith’s idea of Satanism suffers from the same faulty assumptions as Doreen Irvine’s account (see From Witchcraft to Christ); she depicts Satanists as worshippers of the literal devil of the Bible. The rituals are filled with pointless, nonsensical, sinister elements, and horror movie trappings, including at one point the appearance of a monstrous spider crawling across the altar cloth and a vampire bat with claw-tipped wings perched on the altar’s edge. In the final quarter of the book, Satan makes regular appearances in the flesh. And Smith’s depiction of him is an all-out horror movie cliché, right down to the horns on his head and the claws on his hands. Curiously, he has a pig’s snout and sports a tail that occasionally shape-shifts into a snake. Fire sprouts from his back. Amusingly, Satan insists on continually speaking in rhyming verse throughout the account:

The knife is ready. It is time to begin.
It has been poisoned and sharpened very thin.

I confess that when I began reading this book, I seriously considered that this child might have been the victim of some deeply unethical occult group. But by the time I finished, the entire tale had made a nosedive into total religious farce. In addition to enduring the devil’s bad poetry, Smith witnesses heads spinning, just like Linda Blair in the movie The Exorcist (1973). Jesus, the Virgin Mary, and the Archangel Michael appear to Smith at various points during her dark days in the ritual chamber. Absurdly, Mary sprinkles her sentences with French, which would not have been her native language, nor is it Smith’s. The two authors’ combined depiction of Satanism seems to be a fusion of their own Catholic prejudices and Pazder’s past encounters with unusual religion from when he was working and living in Africa in the 1960s. He goes as far as drawing this comparison himself in the book. It’s hard to see how Pazder maintained any credibility with his peers after publishing this unconscionable mix of psychiatry and superstition as fact.

It also turns out that some of Smith’s claims are provably false beyond reasonable doubt. Early in the story, she is allegedly involved in a car crash that is staged to look like an accident, as a means of the Satanists getting rid of a dead body. Conveniently, it happened so long ago that police and hospital records of the event were destroyed at the time of Smith’s therapy. However, Pazder overlooked the fact that it’s possible to check the newspaper records in library archives. No such incident was reported around the time indicated by Smith’s testimony.

The book features a photograph of a mausoleum at Ross Bay cemetery, at which a ritual allegedly took place. However, when this building is snapped from different angle (as another photographer has demonstrated), the mausoleum is revealed to be within eyeshot of suburban houses. Maybe the Satanists used one of Doreen Irvine’s invisibility spells!

Towards the end of the book there is an eighty-one-day non-stop ceremony. Yearbooks from Smith’s elementary school have revealed no indication of her being missing for a lengthy period of time.

There are many more problems with Smith’s account that I could raise, but these examples suffice to destroy her credibility. All that remains is to determine whether she is delusional or an outright liar. The coherency and detail in her account causes me to side with the latter.

Even without the evidence against Smith and Pazder, the simple fact that nothing can be corroborated ought to raise warning bells in the minds of readers. But many people have never made the mental effort to learn what criteria they ought to use in determining truth from falsehood. People tend to believe things if they merely feel true, or if they simply want to believe. The ability to believe claims in the absence of evidence is how witch-hunts are born. And in this instance, that’s exactly what happened.

Michelle Remembers opened the floodgates for countless reports of satanic ritual abuse. Pazder was considered to be an expert. He became involved in the Cult Crime Impact Network and lectured to police agencies about SRA during the late 1980s. By September 1990 he had been consulted in more than a thousand ritual abuse cases.

Closure of the Satanic Panic finally came with the publication of the Lanning Report (1991) by the FBI. Three hundred cases of multi-victim, multi-offender SRA were examined and no physical evidence of abuse could be found. Aside from the occasional unethical pseudo-Satanist, there was no evidence whatsoever of any underground occult organisation engaging in SRA. This document can be read in full on the internet. Conspiracy theorists still like to keep the phenomenon alive. I read this in an online forum: “The Lanning Report is load of pig shit, if you ask me. Written by the same people it claims ‘do not exist.’” Of course, the conspiracy theorist doesn’t require actual evidence of the FBI’s involvement in a cover-up; the mere suspicion of it is enough to warrant belief.

During the years of the Panic, the lives of many law-abiding Satanists (and other non-satanic occultists) were subjected to the judgements of a dangerously ignorant population (including its law enforcement) that was feeding on a diet of sensationalist propaganda.

By contrast, the uncovering of real, verified, widespread child abuse within the Catholic Church has to be one of the most spectacular reversals of expectation in history, as we discover that real evil lies within those who masquerade as the good, rather than those who merely enjoy the glamour of sinister symbolism.

The Satanic Panic must never happen again. That will only be possible through the widespread triumph of reason over superstition.