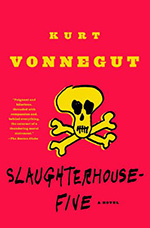 I started reading this novel because of its status as a classic, but I must confess I knew nothing about its theme. As the story got underway, I had the distinct feeling that this was going to be a thoroughly depressing tale about reflections on the horror of war. Not my cup of tea. Imagine my surprise when the story made a weird tangent into Twilight Zone territory. The narrator, Billy Pilgrim, becomes unstuck in time. What I mean is, one second he could be in the trenches of World War II, and the next he could be cuddling up to the woman he married after the war. Two days after that, he could be on exhibit in an extraterrestrial zoo, where he spent some time after being abducted by aliens. Then he might be back in the war. He has no control over what point in time his consciousness leaps into, or when these jumps are going to occur, but his weird condition gives him a perspective on time that allows him to see “the present” as more than just a single knife-edge that exists at only one point in time and is always racing forward. His alien captors, the Tralfamadorians, live in four dimensions all at once, seeing every moment of time as the present. When events happen, good or bad, their reaction is always “So it goes.”

Slaughterhouse-Five is a war story, an absurdist science fiction tale, and also an entertaining philosophy text on the nature of time – which might not be everyone’s cup of tea, but is definitely mine. As someone interested in esoteric knowledge, I had my own eureka moment about time a few years ago. It’s a real delight when I’m reading a story and the author lets me know that we’re both privy to a life-enriching secret: the idea that no matter when you are in time, you’re always in the present.