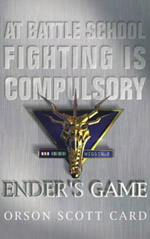 Ender Wiggen, a young boy of six, has the nickname “Third” at school. What this means is he’s the third child born into his family, in an overpopulated future world where it is only lawful for parents have a maximum of two children. Legal permission was granted to the Wiggin family by the military, because their first two kids were very nearly the ideal candidates to save the world – but not quite. What the military needs is a boy genius whom they can shape and train to become the most brilliant military commander the world has ever known.

The reason they need him so much is because earth is under threat by an alien race known as the “buggers.” This nickname was coined because of the insect-like appearance of the creatures and also because all attempts at communicating with them have failed – we simply don’t have anything else to call them. Countless thousands of humans died in the first invasion. Humanity now prepares to send troops to the bugger homeworld before the aliens can launch a second. And if Ender Wiggin’s training is successful, he will be the one to lead the battle.

By all appearances, this is a fairly standard alien invasion yarn that doesn’t seem to be saying anything startling, but what makes this book great is that it is told from the perspectve of a young boy. We get to share in and empathise with all his fears and hopes. Emotionally he is much like any other boy, but intellectually he is on another plane. A large part of the book is taken up with Ender’s training in the anti-gravity Battleroom; the strategies he comes up with for beating his opponents are simple yet brilliant, and a joy to discover.

To cap it all, the novel finishes with the most unpredicatable ending to a galactic-scale war that I could ever imagine.

Ender’s Game has, over time, become the first volume in a quadrilogy. All of the books are worth reading, but this one is without doubt the best. More recently the novel has spawned a spin-off series called the Shadow saga, which is concerned with Ender’s friends from Battle School.

It’s good to see this edition of Ender’s Game repackaged as a young adult novel. This is a wonderful adventure to be read and enjoyed by all ages. 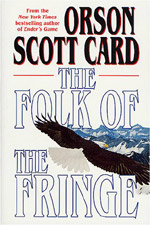 I bought this novel many year ago, not knowing who Orson Scott Scott was, nor having read his excellent Ender’s Game. I found The Folk of the Fringe in a bargain bucket at my newsagents, and purchased it because I was in the mood for an end-of-the-world story. The cover illustration showed a band of scruffy travellers walking along a path towards a ruined city – right up my street. Expecting a decent read, little did I know that this would turn out to be an absolute gem of a book. And, having re-read the book recently, I enjoyed it even more the second time round.

This is a collection of five tales – technicially two novellas and three stories. They take place in a slightly future America in the aftermath of a limited nuclear strike. Limited is the important word, because there are still survivors. They fall into two categories: those who wish to rebuild civilization and those who wish to fill their own pockets. I won’t give you synopses of the stories, but I will say that they are all about the theme of belonging – about the bonds we form with other people and about what we suffer without those bonds. Jamie Teague, the protagonist from the first story, is a loner who makes a living by travelling all across the country and scavenging for items to trade. Everything changes for him when he encounters a group of naive travelling Mormons; he decides to help them before some mobbers arrive and help themselves. Deaver, the protagonist of the second story, is a non-Mormon coping with live in a society of Mormons. Carpenter is a man who feels like an outsider, not because of personal choice or location, but because he has cerebral palsy. These are stories about people who live on the “fringe,” whether literally or figuratively.

These stories are only loosely termed science fiction. They are strongly character-driven tales. In fact, they contain some of the richest depictions of characters I have ever read. The author himself is a Mormon and he mentions his religion a lot. This might be off-putting to the potential reader, but you should persevere. It’s clear the author is not out looking for converts, and the characters in the stories are made all the richer because Card is drawing from his own understanding of life. As a Christian, I related to the mind-set of many of the characters.

I can see how people might dislike this book – an athiest who likes ideas-driven fiction, for instance. For me, The Folk of the Fringe is the strangest, most beautiful, collection of post-apocalyptic stories I’m ever likely to find. They are full of heart.